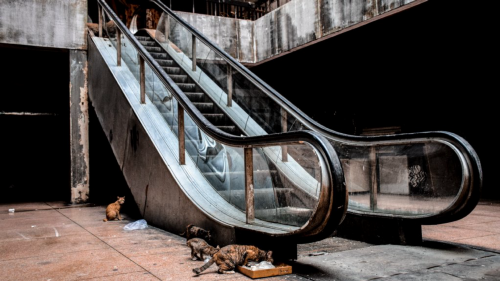 Unsub cased the back hallways where workers entered the mall. Loading docks. Maintenance tunnels. Smoking nooks. He was surprised at the intricacy of the complex (he’d never had the pleasure), but he supposed all this pretzel smell had to snake towards the aerosol dispensers somehow.

The wa of this corridor was seriously off.

Unsub rounded a corner and through a small window in a nearby service door he was confronted with a career-altering view of Europa, daughter of Agenor, descending the escalator, resplendent in whatever the Hel that was. He had to put on his sunglasses.

It was that much.

This would do. If she was already to the stage of making public appearances, she’d almost certainly use this same route again. It was easier than carving new channels.

The persistence of audiences.

SL wasn’t sure if he was ready. There had been no mall in his little town. Walking here had already been quite an undertaking. But all of that was prologue. Here was a chance to follow his circuit within the (relative) safety of a firmly established commercial tradition. Here was a place where people had seen a man dressed head to toe in white, carrying a walking stick inscribed with Sanskrit vowels. Here was a place with a Waldenbooks.

One hand holding open his small backpack, SL transferred every single comic book from the Waldenbooks rack into his bag. Because this was the city, no one noticed him, or cared what he was doing. The store would treat shrinkage as a matter of course, part of the cost of doing business.

"You know," Esmé said, suddenly appearing from over SL’s shoulder, "Shoplifting raises prices for everyone."

SL regarded the young woman, young enough to be his daughter, but also inarguably correct. He sensed instinctively that this must be some sort of test. The kind of test he’d come here to pass, to walk through, to carry on to the next generation, for the benefit of the whole world.